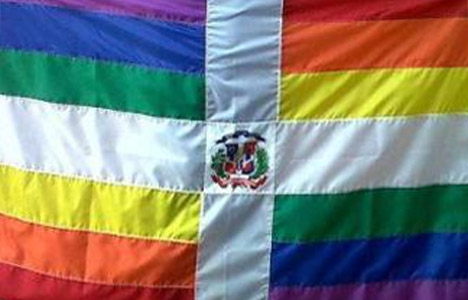 In 2015, the US Supreme Court issued a landmark decision, legalising same-sex marriage throughout the country. President Obama wrote on Twitter: «Today is a big step in our march toward equality. Gay and lesbian couples now have the right to marry, just like anyone else. #LoveWins». 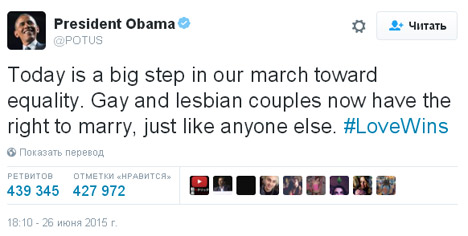 Obama’s directive, which identifies the protection of sexual minorities as a priority of US foreign policy and stipulates that their rights be defended, has also been sent to US missions overseas. US State Secretary John Kerry is giving the issue his utmost attention. The post of Special Envoy for the Human Rights of LGBT Persons has been created under his personal supervision, to which the American diplomat and homosexual Randy Berry has been appointed. He has stated that he intends to fervently defend the interests of LGBT persons in Latin America, primarily in countries not known for their tolerance of sexual minorities.

One of the first steps of Obama’s ‘rainbow’ experiment was the appointment of James ‘Wally’ Brewster as US Ambassador to the Dominican Republic in 2013. It should be noted that Santo Domingo was the very first city to be colonised by the Spanish Crown in the Western hemisphere: it is the site of the first university, the first Catholic cathedral and the first fortress.

The people of the Dominican Republic, who are traditionally conservative in everything related to family life and the raising of children, greeted the news of Brewster’s appointment with indignation. Reverend Cristóbal Cardozo, leader of the Dominican Evangelical Fraternity, openly referred to the appointment of the gay ambassador as «an insult to good Dominican customs». In an address to the Dominican senate, the United Left Movement also expressed concern at the appointment. The rationale is obvious: the people who sent Brewster «have not taken into account the cultural practices and religious principles of the Dominican people». 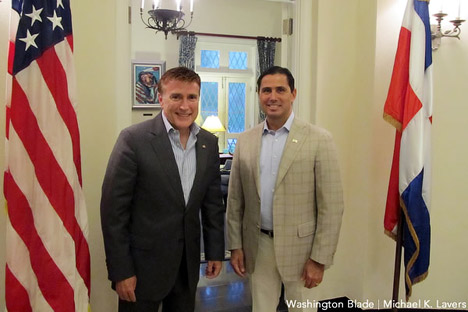 Before Brewster’s departure for the Dominican Republic, he married Bob J. Satawake, a wealthy real estate agent, who is referred to in the Dominican media as the ambassador’s husband. The newly-weds have vigorously set about strengthening the position of LGBT persons in conservative Dominican society, with a particular focus on work with young people in schools and universities.

Not all of the ambassador’s initiatives are proving successful, however. The country’s Ministry of Tourism, for example, did not embrace the vision put forward by the US Embassy of tourism marketed to LGBT persons from the US with a projected profit of up to $1.5 billion.

Brewster complained to friends that the Dominican people were incapable of doing basic math, since the majority of gay tourists are among the most solvent, which would prove extremely profitable for the Dominican Republic.

Catholic bishops and priests view Brewster as an enemy, strongly condemning the sin of same-sex cohabitation and protesting every time Brewster and his husband visit educational establishments. 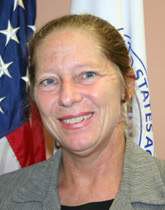 General elections are due to take place in the Dominican Republic on 15 May 2016. The election campaign has been accompanied by scandals, at the centre of which is the US Embassy and the US Agency for International Development (USAID). Indignation at America’s interference in the Dominican election process has become particularly acute following statements made by Alexandria Panehal, the USAID Mission Director in the country, on the existence of a special $1 million fund to promote LGBT programmes and LGBT ideology. According to Panehal, the US Embassy and USAID are using this money to fund the election campaigns of homosexual Dominican politicians. The creation of an LGBT Chamber of Commerce has also been announced.

Panehal’s announcements have caused a storm of protests and a rise in anti-American sentiment in the Dominican Republic’s social, political and religious circles. So why is Panehal doing it? She has enough international experience, after all. Almost all of her overseas assignments have involved countries where the situation has been complex, and a variety of threats required cautious approach. She worked closely with the CIA on the ‘democratisation’ of Nicaragua project, as well as programmes to prevent a rapprochement between Honduras and ‘populist’ states and between the Republic of Haiti and Venezuela following a devastating earthquake. Panehal was involved in attempts to overthrow President Rafael Correa in Ecuador, and has also served as USAID Deputy Mission Director in the Regional Mission for Ukraine, Moldova and Belarus (a post reserved for a CIA representative).

Some political analysts have expressed the view that US representatives are carrying out a multistage experiment in the Dominican Republic, studying the «emotional and psychological resilience» level of Dominicans to new techniques involving the erosion of the traditional family and marriage. The tone was set by Obama himself when, in April 2015, he placed the treatment of LGBT community as one of the first topics to be discussed during an official visit to Jamaica, expressing his concern over the fact that homosexuality is illegal on the island.

Experts consider Luis Abinader, leader of the Modern Revolutionary Party (PRM), to be the US candidate in the Dominican Republic’s forthcoming elections. He has been trying to keep his links with the US quiet, but in Catholic circles it is believed that Abinader has already reached an agreement with the US Embassy to relax the government’s LGBT policy and amend the constitution to allow same-sex marriage. The current president, Danilo Medina (Dominican Liberation Party), intends to retain his post and, judging by the polls, he has every chance. He has spoken with restraint about the US Ambassador’s theatrical stunts, apparently believing that Brewster has compromised himself so much that he does not pose a threat to the religious and moral values of the Dominican people. 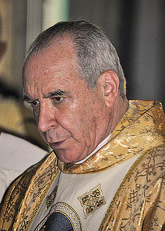 The severity of the criticism that has been raining down on gay US diplomat from Catholic bishops has reached its peak and representatives of the Catholic episcopate have not been shy about their choice of words. Seventy-five-year old Cardinal Jesus Lopez Rodriguez has openly used offensive remarks with regard to the ambassador and has suggested that he should «focus on housework, since he's the wife to a man». In response to criticism from the US about his intolerance, the cardinal said that with regard to the LGBT issue, he has always maintained the same position and expressed his views openly and he has no intention of changing them. As one would expect, Ambassador Brewster is mobilising the local LGBT community for an offensive against «reactionary Catholic circles». The immediate goal is to remove Cardinal Lopez Rodriguez. 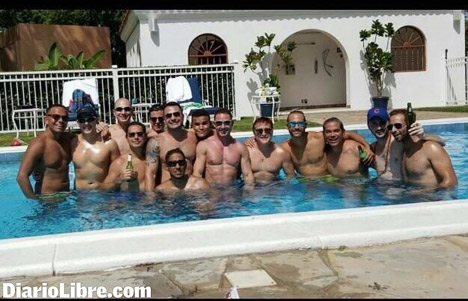 At the same time, the US Embassy is doing everything it can to ensure the broadest possible presence of overt and covert LGBT activists in the country’s legislative and executive powers. The elections in May will show whether America’s gay conspirators have succeeded in implementing Obama’s plan for the Dominican Republic – to turn it into a nature reserve for LGBT tourists and a stronghold for the penetration of LGBT ideology into other Caribbean and Latin American countries.