Spain: Podemos party in the crosshairs of US intelligence agencies

On the 7th floor of the US Embassy’s enormous building in Madrid is the CIA station. For more than half a century, active intelligence work has been carried out from this site, but its objective is not only to gather secret information on the domestic and foreign policies of Spain. A wide range of delicate issues aimed at guaranteeing the US’ strategic interests in the country are looked at on a daily basis. Thus the station focuses on preventive operations to ‘neutralise’ organisations and politicians that are potentially hostile to the US.

Spain is quite rightly considered to be one of the EU’s weakest links. A series of corruption scandals has undermined the credibility of Mariano Rajoy’s government (Sp. Presidente del Gobierno Mariano Rajoy). The antipopular austerity policy has sharply aggravated the situation in the country: there has been a rise in unemployment, especially among young people, the salaries of public sector workers have been cut, social expenditure has been reduced, and education and healthcare has deteriorated. Many people unable to pay their rent and utility bills have been thrown out onto the street. Television reports on forced evictions have had a far greater impact on the mood of the Spanish electorate than any opposition propaganda: the crisis is not sparing anyone, we could find ourselves in their place tomorrow, and the country needs a new leader and a new domestic and foreign policy. 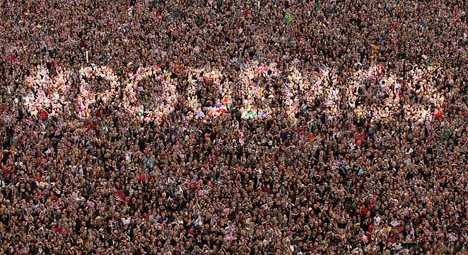 Surveillance of young, radical left-wing politicians in Spain began long before the groups and organisations they led were consolidated into the Podemos party (in English, Podemos translates as «We can»). Every stage of the process was monitored via agents, electronic surveillance and social networking sites. Operations files were replenished with information on university lecturers and students, political and social activists, members of the creative intelligentsia, and sympathetic journalists. Every step taken by the project’s key players – Pablo Iglesias, Juan Carlos Monedero and Íñigo Errejón – was documented. 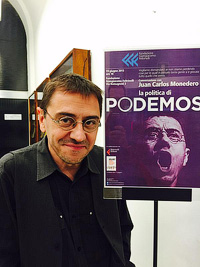 Contact between these young ‘protesters’ and members of populist regimes in Latin America – Venezuelans, Ecuadorians, Nicaraguans and Bolivians – has caused, and is still causing, American and Spanish security agencies a great deal of anxiety, while trips by the ‘protesters’ to Brazil, Argentina and Cuba have caused just as much alarm. Juan Monedero, who was an adviser to President Hugo Chávez on financial and economic issues between 2005 and 2010 and provided expert assistance to the Ministry of Planning and the Miranda International Centre on staff training, has aroused particular suspicion. Monedero also advised the governments of Venezuela, Bolivia, Ecuador and Nicaragua on establishing non-cash settlements in regional trade.

The Podemos party’s entry onto the Spanish political scene (in February 2014) was accompanied by the intelligence agencies stepping up their covert activities to expose ‘possible’ compromising information on Podemos activists and the party’s leader, Pablo Iglesias. It is no secret to the ‘subjects’ of the surveillance that they are being vigilantly monitored by the CIA and the US National Security Agency (NSA). It stands to reason that the National Intelligence Centre (CNI) of Spain, whose senior officials regard the activities of Podemos in a negative light, is not staying on the sidelines. The reason is clear: the seemingly stable two-party system is becoming a thing of the past and the emergence of a new political force has become problematic. 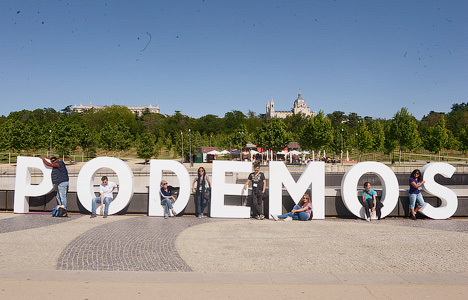 General elections are to take place in Spain at the end of 2015 and, according to the predictions of political analysts, they are going to change the balance of political forces in the country considerably. It is becoming increasingly obvious that the centre-right People’s Party (Partido Popular – PP) and the centre-left Spanish Socialist Workers’ Party (PSOE) will lose their dominant positions. The popularity of the Podemos party was confirmed at the local elections on 24 May 2015. Suffice it to say that Manuela Carmena, a protest movement activist, is now in charge of Madrid’s city hall, which has traditionally been ruled by PP protégés, and Ada Colau, an advocate of real, rather than cosmetic, reforms in the country, is now the mayor of Barcelona. Hundreds of new mayors are promising to make the fight against economic inequality, social justice, and the involvement of the people in the running of the country their priority. 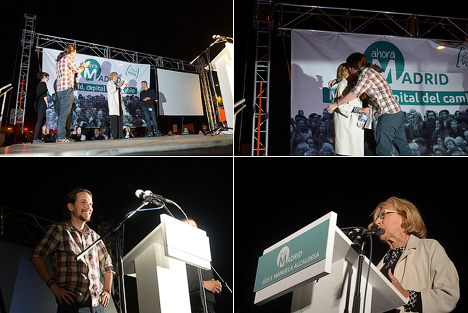 Pablo Iglesias attended the inauguration ceremony for the new mayor of Madrid and called for his fellow countrymen and Podemos supporters not to rest on their laurels, but to continue fighting for change and defeat Mariano Rajoy’s People’s Party in the general elections.

Podemos’ success was overshadowed by the resignation of Juan Monedero. In January 2015, the Complutense University of Madrid and the Finance Ministry, as if on command, began looking into the legality of substantial sums of money received by the politician from the governments of ALBA countries (the Bolivarian Alliance for the Peoples of Our America, (Sp. Alianza Bolivariana para los Pueblos de Nuestra América), is a socialist alliance of Latin American and Carribbean states). At the same time, an article appeared in the Conservative newspaper El Pais accusing Monedero of ‘falsifying’ most of his academic employment history. There is no doubt that this compromising information would not have emerged without the involvement of US intelligence agencies. I need only mention that the newspaper Diario Las Americas (published in Miami), which is used by the CIA to disseminate so-called ‘active measures’, published an interview with Spain’s former prime minister, José Aznar. He accused Podemos of being financed by Venezuela: «Podemos is a political movement that fully advocates totalitarian models and populist ideas». Naturally, the party filed a lawsuit for libel and slander.

After a huge hullabaloo in the media, the issue of «subversive funding from Hugo Chávez» was explained satisfactorily and El Paisissued an apology, but Monedero still felt it necessary to leave Podemos. The upcoming election campaign promises to be tense, and his previous association with Latin American populists and adherence to Marxist ideology will certainly be used by his political opponents.

It is important to note that Podemos has recently been avoiding provocative political language. Now, its moderate-centre electoral programme is geared towards the wider electorate. There is no mention of plans to abolish the Spanish monarchy, to grant the regions the right to secede from Spain, to nationalise key industries and banks, and to seize without compensation surplus accommodation from its owners and give it to the homeless. Pablo Iglesias himself is declaring his allegiance to social democratic ideals and the Swedish model of socialism. He has even talked about the history of the party’s name, Podemos. Apparently, it does not come from Marx or Lenin, but from Barack Obama, who led his fight for the presidency in 2008 under the slogan «Yes, we can!» 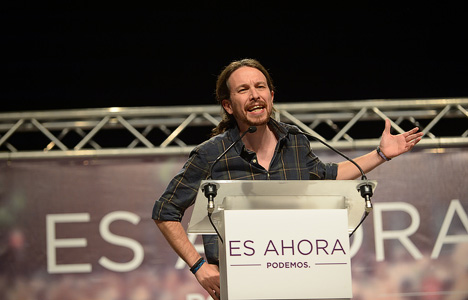 Distrust of Podemos in the higher echelons of the US is only getting stronger, however. That the party intends to use the experience of Venezuelan populists to conquer hegemony in the country is constantly being emphasised in the information coming from the intelligence agencies. For now, however, Podemos’ minimum goal is to win in the elections. Only then, apparently, will Pablo Iglesias and his team take steps to seize the real powers. Such ‘focus’ by the Americans on interpreting Iglesias’ plans is intended to justify the magnitude of the complex intelligence measures against the Podemos party. One needs only compare the list of US Embassy personnel in Madrid over the last five years with the current one (published by the Spanish Foreign Affairs Ministry) to see that the size of the CIA station operating under the roof of the political department has more than tripled.

The question of whether the US intelligence agencies in Spain have sufficient potential to ‘adjust’ the results of the forthcoming elections still remains open. During the last election campaign in Mexico, the moderate populist López Obrador had a distinct advantage. Washington’s candidate, however, was Peña Nieto, and with the help of questionable manipulations behind the scenes of the electoral process, he became the next president of Mexico.

During closed parliamentary hearings, the head of the National Intelligence Centre (CNI) of Spain, Félix Sanz Roldán, said he «felt uneasy» about the operations of US intelligence agencies in the country, especially the US National Security Agency (NSA). «They are guided by their own laws», said Roldan. He also referred to the covert activities of secret service agents in Spain from «allied countries». Nine such agents have been expelled from Spain in recent years. Roldan did not specify which countries exactly, but judging from publications and independent sources, he was referring to the US and Israel. The number of ‘illegals’ like these in Spain is measured in three figures.

The Ministry of Foreign Affairs invited US Ambassador James Costos, and later the charge d’affaires Luis Moreno, to get an explanation regarding the NSA’s illegal ‘wiretaps’ and its monitoring of information exchanged over the internet, including social networking sites. The Spanish authorities’ timid attempts to at least normalise the behaviour of US intelligence agencies in their country are proving fruitless.

One gets the impression that in some cases, Rajoy’s government is not dealing with the activities of foreign intelligence services against Spanish citizens in the country as categorically as CNI head Roldan tried to prove in parliament. Observers are not ruling out the possibility that the Podemos leader’s involvement in the presidential elections will be sabotaged with the help of a large-scale act of provocation by US intelligence agencies.

↑ Scroll to top ↑
Read on Tiwy.com